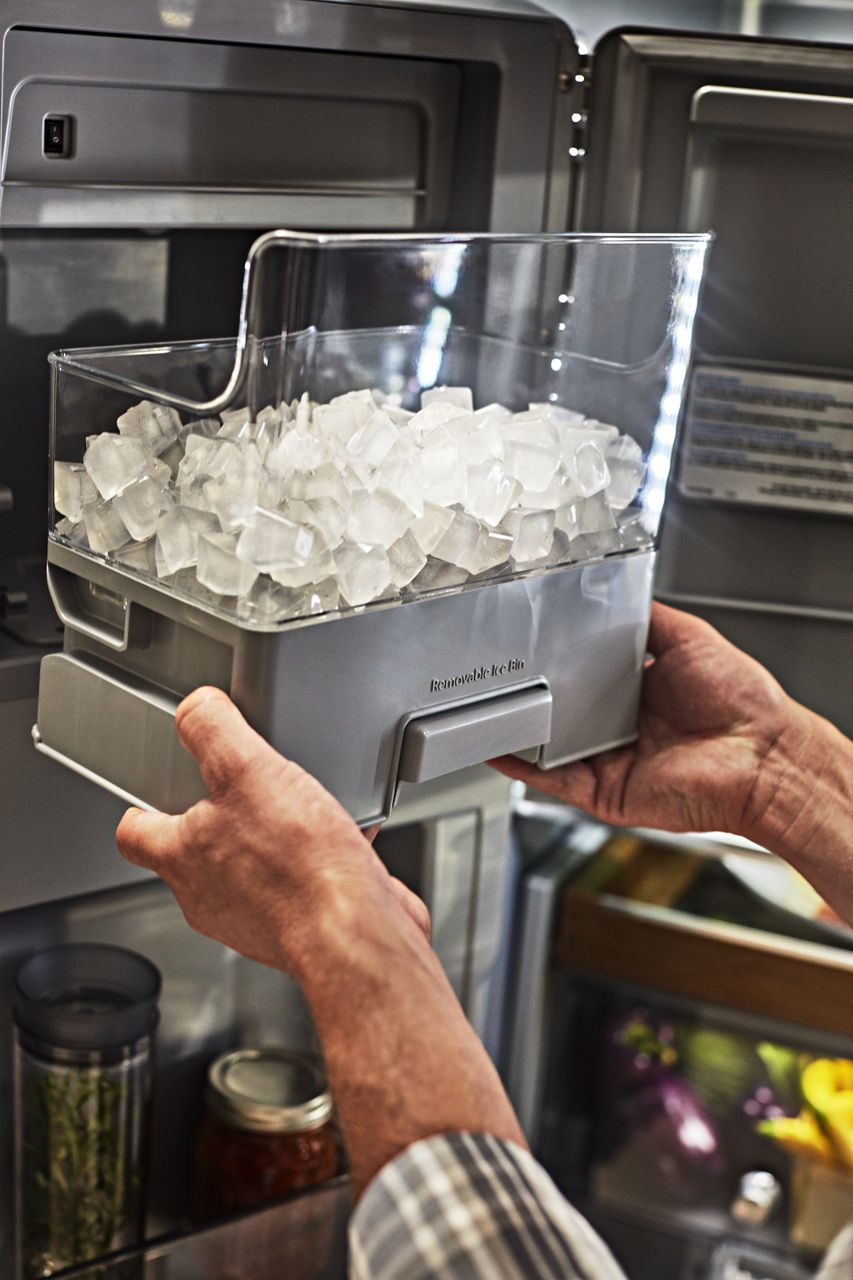 An ice maker is an absolute boon for a household. No longer do you have to constantly refill ice trays or have to start making ice batches ahead of time just to have enough for a party or barbecue. As long as you continue to use your ice maker on at least a daily basis, you are unlikely to have any problems with ice not dispensing. It is when we stop needing ice as often like in the dead of winter, that ice makers can start having issues with ice getting stuck.

If the ice in your ice maker keeps getting stuck and not dispensing, here is how you can fix it and prevent it from happening again.

Ice Clumps in the Bin

One of the most common – and innocent – causes of an ice maker that won’t dispense ice is that an ice clump has formed inside. In order to drop the ice cubes from the mold, heat is released to lightly melt them. This ambient heat, or even just heat that comes from opening your freezer door, can lightly melt the ice in the bin as well. While the auger is designed to unstick these ice cubes from each other, if you aren’t using your ice maker very often, the auger won’t turn on. Over time, this forms into a formidable chunk of ice.

When you have an ice chunk blockage, typically you will hear the auger trying to break up the ice. This results in a louder than normal grinding and perhaps a few ice shards being dispensed as it breaks a few off.

In order to rectify ice chunks, you will need to go inside your ice bin and fish them out. This can get pretty difficult, however, if they have frozen into a sizable mass. Sometimes you may need to remove the entire bin or even defrost the ice maker. However, it can also be as simple as just breaking up the ice chunk with your hands. It is usually best to toss any sizable chunks that can’t be broken up into the sink. They will just form larger chunks again since they are too big to be dispensed and too sturdy to be broken by the auger.

Ice is Caught in the Raker

While not every ice maker comes with this part, if your ice maker has a raker, ice could get caught in it. The raker is responsible for raking through the ice cubes to evenly distribute new ones in the ice bin. This part can actually work to prevent ice chunks that can clog the system up, but if an ice block does form or even if the ice cubes catch in a strange way, it can stop the raker. If it becomes jammed, it can prevent the ice maker from distributing ice.

The fix to this is usually going in by hand and removing the ice that is blocking the raker arm. As the raker arm will be visibly stuck, you can easily deduce this is the problem. At times, it may become stuck because the ice maker has too much ice inside it. If this is the case, you will want to remove the excess ice cubes.

The Ice Dispenser is Clogged

Just like the ice bin, it is just as likely that your ice chute is jammed when you press the lever and discover no ice comes out. Usually, when you press the lever and see that nothing is being dispensed, your first instinct is to open the freezer and check the ice bin. You will also want to check the dispenser if you see no visible ice chunks in the bin.

If you spot a clog in the ice dispenser, you will want to try and fish it out. Sometimes it is just that the ice cubes went in wrongly and got jammed. A few prods will break it loose. However, if an ice chunk is lodged in there, sometimes the only thing you can do is wait for it to melt. You will want to place a catch under the dispenser as it melts down so you don’t get water everywhere.

The Auger Motor is Frozen

Sometimes when you don’t use an ice maker for a long time, the cold temperature will actually freeze the auger motor behind the freezer wall. When this happens, the auger won’t spin as designed. While you may get a few ice cubes, without the auger, it won’t bring new ice cubes forward to the chute.

When this is your problem, you will want to keep the lever depressed. As the auger motor runs, it will actually start to warm up and melt the ice on it. This is a quick fix, but it is one that is hard on the motor. You may want to look into how moisture got behind the freezer walls to freeze the motor in the first place. You will also want to note that the melting moisture could damage the motor as well.

There Isn’t Actually Any Ice

Unfortunately, a problem dispensing ice can occasionally be a problem actually producing ice. If nothing is coming out of your ice dispenser, it may be because there is actually no ice in the bin. When this happens, you want to double-check that the ice maker is actually on. If the ice maker is turned off, it won’t make ice. Turning the ice maker off during times where you don’t need as much ice can help prevent a lot of problems above.